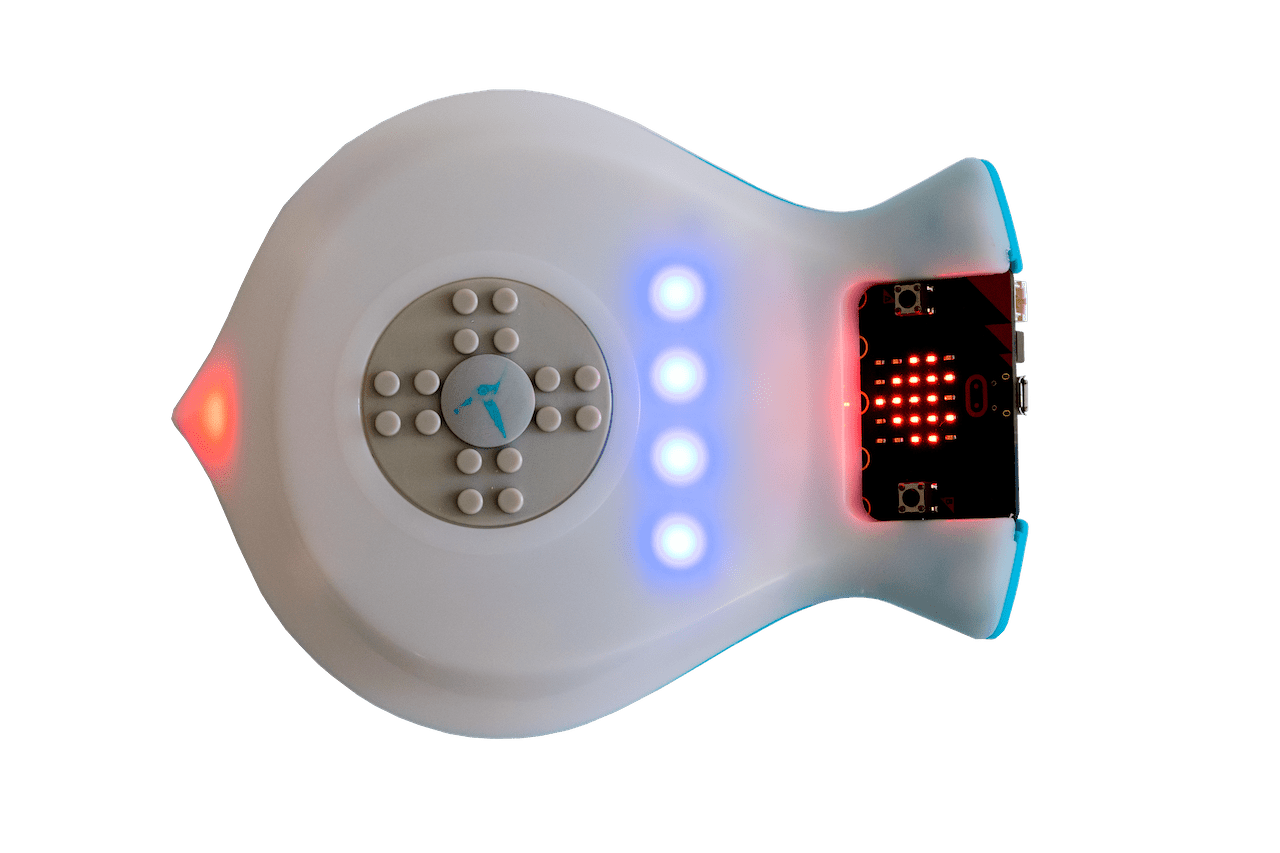 In the last lesson, you learned to use while loops to repeat actions. In this lesson, you will use a different kind of loop, the for loop. You will use this loop with a new Finch output, the micro:bit display. There are 25 tiny lights called LEDs (light-emitting diodes) that are arranged in a 5 by 5 grid on the micro:bit in the Finch tail. You can write programs that use these LEDs to make letters and simple pictures.

Printing to the micro:bit

Ask the user for their name. The program should then display “Hi” and then the user’s name. Some names may have 10-12 letters, so make sure your program waits long enough to print a long name.

To turn individual micro:bit LEDs on or off, use the setPoint() method. This method takes three parameters. The position of the LED is given by the row and column parameters, which should both be between 1 and 5. The third parameter is the value of the LED, which must be 0 (off) or 1 (on). 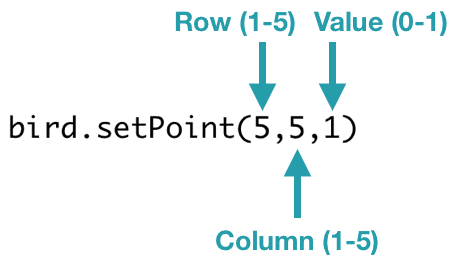 Try out this code. It should turn on the LEDs at the corners of the micro:bit display for one second. Then modify this code to light up the LEDs along both diagonals of the display.

To create more complicated effects on the micro:bit display, you can use a for loop. In the last lesson, you used a while loop, which repeats the statements inside it as long as a Boolean expression is true. A for loop, on the other hand, repeats the statements inside it a specific number of times. For example, the code below will make the Finch’s beak blink on and off five times.

In Python, range(5) produces a list of numbers from 0 to 4: [0,1,2,3,4]. The list contains all the numbers between 0 and the parameter of the range() function. The list includes 0 but does not include the parameter.

Use a for loop to make the Finch move forward and backward six times.

What do you think this code will do? Make a hypothesis, and then test it out.

Write a program that gradually draws a square on the micro:bit display. Hint: You will need to use multiple for loops.

To display different patterns on the micro:bit, you can also use the setDisplay() method. This method sets the LED array of the micro:bit to display a pattern defined by a list of length 25 (you will learn more about lists in Python in a later lesson). Each value in the list must be 0 (off) or 1 (on). The first five values in the array correspond to the five LEDs in the first row, the next five values to the second row, and so on. For example, this code lights up the top and bottom rows on the micro:bit display. This code shows the numbers for each micro:bit row on a different line. This isn’t required in Python, but it makes the code easier to read.

Try out the code above. Then modify the code to display a smiley face on the micro:bit display.

Write a program to make the Finch move in a triangle, pentagon, or other shape. Your program should do the following:

For an added challenge, give the user an error if they enter a number less than 2.