Use a multimeter to determine the speed of a gear motor.

Any language supported by Hummingbird Bit

This project addresses the Next Generation Science Standard MS-PS2-3: “Ask questions about data to determine the factors that affect the strength of electric and magnetic forces.” It also aligns well with NGSS Practice 3 (Planning and Carrying Out Investigations) and Practice 4 (Analyzing and Interpreting Data). In addition, this project addresses Common Core math standards involving the analysis of bivariate data, particularly 8.SP.A, HSS.ID.B, and HSS.ID.C.

The command to the Hummingbird gear motor sets the speed of the motor using a number from 0 to 100. We developed this project to demonstrate how this number controls the voltage supplied to the motor as well as how the rotations per minute of the motor.

This project uses a gear motor, a light sensor, Scratch, and an inexpensive multimeter. Scratch is used to run the motor at a given command level (20, 30, 40, etc.) for 60 s. A strip of cardboard is attached to the motor. Each rotation of the motor causes the strip of cardboard to pass over the light sensor. The Scratch program detects this movement as a change in the light sensor reading. Specifically, the Scratch program counts the number of times that a light sensor reading is below the threshold and the previous reading was above the threshold. This is displayed on the screen as the variable counts. This project could be simplified by having students simply count the number of rotations of the motor in one minute.

A multimeter is used to measure the voltage supplied to the motor. To accomplish this, we inserted two extra wires into the gear motor ports and used alligator clips to attach these wires to the multimeter. At low motor commands (20-30), the voltage reading may appear to vary between a lower value and a higher value. If this happens, the higher value should be recorded. 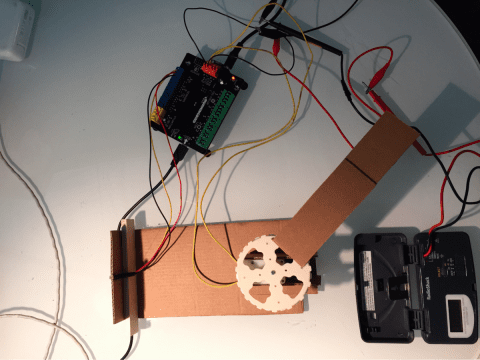 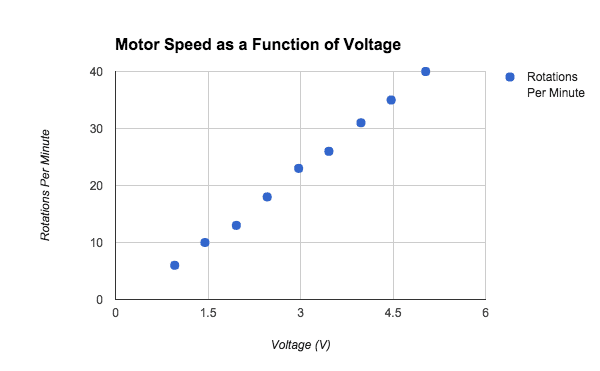 Students could also extend this project to consider negative motor commands. Negative motor commands will result in negative voltages (if the connection to the multimeter remains the same). An example of a graph with negative voltages is shown below. In this graph, all rotations are taken to be positive. Students could also consider the direction of rotation. For example, clockwise rotations could be considered positive and counterclockwise rotations negative. This would results in a linear graph. 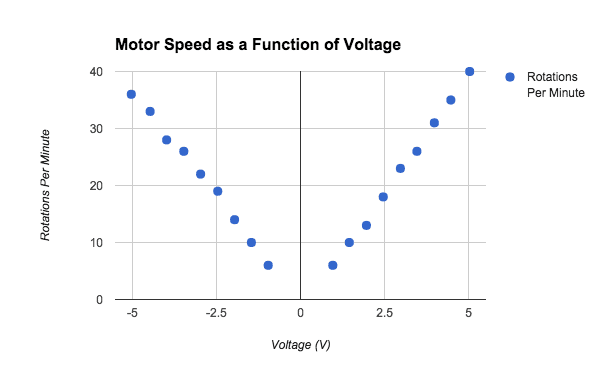 This project is presented as a demonstration, but students need not be told to conduct exactly this experiment. Rather, they could be shown how to measure voltage and challenged to design an experiment to measure the relationships among voltage, motor commands, and motor speed.

The motor is actually controlled using pulses of voltage (pulse-width modulation), but the multimeter averages these pulses into a fairly constant voltage reading. However, we believe that these pulses caused the oscillation in the voltage values that we observed at low motor speeds. Students may also notice that voltages near 0 (for example, 10 or -10) do not cause the motor to move. This is because the power to the motor is not enough to overcome the friction of the motor.